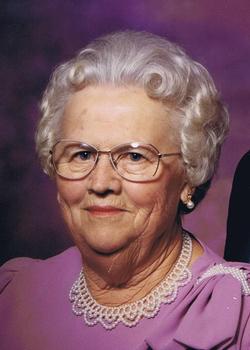 Verna Kruse, age 95, of rural Sorento, passed away Tuesday, September 30 at Heritage Health of Litchfield. Funeral services for 95 year-old Verna Kruse will be Saturday, October 4, at 11:00 a.m., at the Immanuel Lutheran Church in New Douglas. Burial will be in New Douglas Cemetery. Friends may call Saturday, from 9:00 – 10:45 a.m. at the church. Memorials are suggested to the New Douglas Cemetery or the Immanuel Lutheran Church. The Lesicko Funeral Home in Livingston is in charge of arrangements.

She was born on Wednesday, June 25, 1919 in Shoal Creek Township, Bond County, IL. Her parents were John and Adelia (Eickmeyer) Schallenberg. She was married to Howard H. Kruse on September 14, 1940 at the Immanuel Lutheran Church in New Douglas, IL. He preceded her in death on Tuesday, November 27, 2001.

Verna was a Homemaker.

She was a member of Immanuel Lutheran Church in New Douglas, IL; the Montgomery County Farm Bureau since 1945; She was also a Former Member of the following organizations: The Church’s, Mary’s Circle and the New Douglas Senior Citizens.

She was preceded in death by her Parents: John and Adelia (Eickmeyer) Schallenberg; Husband: Howard H. Kruse a Sister: Wilma Otto and a Brother: Eugene Schallenberg.