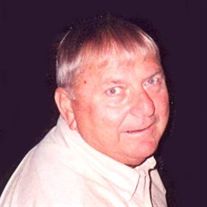 Funeral service will be at 10:00 AM on Wednesday, November 12, 2014, at Saint Paul Catholic Church in Highland, IL, with Rev. Fr. Charles A. Edwards officiating.

Memorial contributions may be made to Masses or Charity of Donor’s Choice.

On June 16, 1962, he married Grace Florence von Hatten who survives.

He was a member of Saint Paul Catholic Church. He was also a member of Highland Optimist Club (Past President and Life Member) – Knights of Columbus Council 1580 Highland – Helvetia Sharpshooters Society.

Clarence was born in Highland, Il and a graduate of St. Paul School in 1953. He worked for U. P. S. and then for Linenfelser Lumber Co. in Highland until his retirement in 1999. He was an avid golfer and a Course Marshall at Bent Oak Golf Course in Breese. He also loved cooking and barbequing. He volunteered and cooked with the Knights of Columbus at St. Paul and Kirchenfest. He liked to travel and play cards.