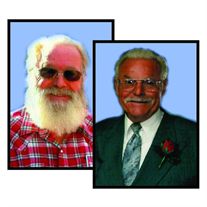 Anthony “Tony” M. Frey, age 77, of Highland, passed away Saturday, November 15, at St. Luke’s Hospital in Chesterfield, Missouri. Funeral services for 77 year-old Anthony “Tony” M. Frey will be Thursday, November 20 at 10:00 a.m. at St. Paul Catholic Church in Highland. Burial will be in St. Paul Catholic Cemetery. Friends may call Wednesday from 4:00 to 8:00 p.m. and again Thursday from 8:00 to 9:30 a.m. at the Spengel-Boulanger Funeral Home in Highland.

Tony was born southeast of Pierron, IL; he attended Immaculate Conception Catholic School. He was a farm hand, after marriage he worked as a dock hand, “spotter” and driver for Local 600, Maryland Heights, MO. He worked for Middle West Trucking, TMX, ANR, PTL and Beaufort Trucking. He retired in 1993. In his retirement he helped Scott Frey and Alvin and Keith Frey with their farm operations and worked at Korte Meat Processing. He raised animals, chickens, ducks, horses, cattle, rabbits, geese and showed Racking Horses on his five acres. There were two special cats Fluffy and Tuffy. He harvested 800 pounds of pecans this past year. He played Santa Claus for many years. He enjoyed hunting, fishing, being outside, chopping wood, the St. Louis Cardinals and watching WWE on TV. He loved driving Scott Frey’s big green Steiger tractor. He loved his grandchildren and was admired and loved by everyone.