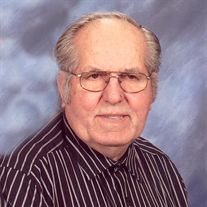 Clifford O. Thurnau, age 83, of Glen Carbon, passed away Monday, November 24, at Eden Village Retirement Center in Glen Carbon. Funeral services for 83 year-old Clifford O. Thurnau will be Monday, December 1, at 11:00 a.m., in St. John’s United Methodist Church in Edwardsville. Burial will be at 2:00 p.m. Monday in Benld Cemetery. Friends may call Sunday, from 3:00 – 7:00 p.m., at the Dauderman Mortuary in Hamel and Monday, from 10:00 a.m. until service time at the church. Memorials are suggested to Eden Village or St. John’s United Methodist Church.

He was born in St. Jacob Township and graduated from Highland High School in 1950. He served with the US Army, active duty during the Korean War from Jan 1953 to Dec 1954. He farmed many years near Hamel, operating a grain farm and raised Black Angus cattle. He also worked for Madison Service Company, George Willaredt Farms, Worden Elevator and Suhre Farms. He enjoyed square dancing, going to auctions, collecting toy farm equipment and was very active with Rural Youth and 4-H. Clifford and Betty were married 35 years, he was married to the love of his life and passed away on their wedding anniversary.