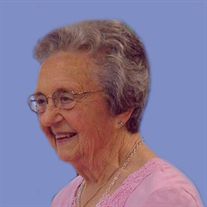 Elaine T. Bornhauser, age 85, of Highland, passed away Saturday, November 22, at Faith Countryside Homes in Highland. Funeral services for 85 year-old Elaine T. Bornhauser will be Wednesday, November 26, at 11:00 a.m., at the Spengel-Boulanger Funeral Home in Highland. Burial will be in Highland City Cemetery. Friends may call Tuesday, from 4:00 – 8:00 p.m. and Wednesday, from 8:00 a.m. until service time at the funeral home. Memorials are suggested to Hospice of Southern Illinois or the U.S.O.

Elaine was born south of Highland, in the Sebastopol Area. There, she grew up on the family farm. She had worked at Moulton-Bartley Shoe Factory and Alton Box Co. She then attended Beauty Academy in East St. Louis and ran Elaine’s Beauty Salon in Highland for 35 years, until retiring in 1993. After retiring, she lived on Suppiger Lane and later at Highland Home. She has been in the nursing home since October 2013. She enjoyed gardening, and liked to Crochet and spend time with her grandchildren and great grandchildren. At the VFW she helped with Friday Fish Fry’s, Blood Drives and Bingo. She was very active with the Ex POW organization, as her husband had been a POW during WW II.