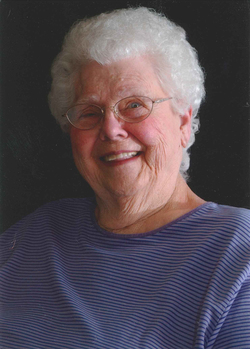 Frieda W. Rainey, age 91, of Carlyle, passed away Friday, November 7 at Carlyle Healthcare Center. Funeral services for 91 year old Frieda W. Rainey will be held Friday, November 14 at 11:00 a.m. at Messiah Lutheran Church in Carlyle. Burial will be in Yingst Cemetery north of Carlyle. Friends may call Thursday from 4:00 to 8:00 p.m. at Zieren Day Funeral Home in Carlyle and Friday from 9:00 a.m. to service time at the church. Memorials are suggested to Yingst Cemetery.

She was born on August 1, 1923, in Section 1, Lake Township, Clinton County, Illinois, a daughter of August E. and Ida C. (Aldag) Goesling and was confirmed at Trinity Lutheran Church in Hoffman in 1936. On October 4, 1940, she married Ebert L. Kelley and they later divorced. She married Ralph E. Rainey on May 9, 1946, at Messiah Lutheran Church Parsonage in Carlyle, by Pastor Paul F. Hartmann.

She was preceded in death by her parents – August and Ida Goesling; her husband, Ralph E. Rainey on April 13, 2014; a son – Gary Rainey; a brother – August Goesling; a sister – Esther Welch; and a grandson – Charles H. Mason, III.

Mrs. Rainey was in business in Carlyle for many years. With her husband, she owned and operated Riverside Tavern, and operated Club Royale for a short while. She worked in a Brown Shoe Co. factory in Trenton and was a member of the Shoe Workers Union there. From 1960 to 1970, she was a Tupperware Home Parties Dealer and Unit Sales Manager in this area. She and her husband owned and operated Reaban’s Drive-In, later known as Rainey’s Drive-In for 18 years, beginning in 1969. During this same time period, they had a Pick-Ur-Own Strawberry Farm in Wheatfield Township from 1962-1978. They also operated a Trap and Skeet Shooting Range for a few years. Her hobbies included bingo, card playing, embroidery and quilting.