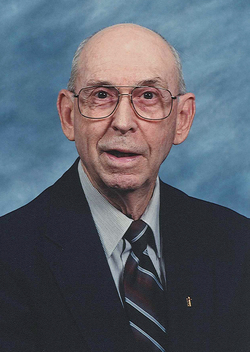 John Montacue, age 90, of Carlyle, passed away Wednesday, November 12, at St. Joseph’s Hospital in Breese. A Mass of Christian burial for 90 year-old John Montacue will be Saturday, November 15, at 11:00 a.m., at St. Mary’s Church in Carlyle. Burial with military honors will be in St. Mary’s Cemetery. Friends may call Friday, from 4:00 – 7:00 p.m. and Saturday, from 9:00 – 10:30 a.m., at the Zieren Day Funeral Home in Carlyle. Memorials are suggested to a scholarship in memory of his son – the John J. Montacue, III Scholarship at John A. Logan College.

He was preceded in death by his parents – John and Marguerite Montacue; his wife – Jean Montacue; and a son – John Montacue.

Mr. Montacue worked for Kroger for 39 years, where he managed stores in Carlyle, Centralia and Breese. He was a veteran of the U.S. Army and served in the Pacific Theater of Operations during World War II. He was awarded the Purple Heart for wounds received in action. John was a lector, Eucharistic Minister, and member of St. Mary’s Church in Carlyle. He was a life member of Optimist International, Knights of Columbus, V.F.W. and the Catholic War Veterans. Mr. Montacue was an avid bowler and Cardinals baseball fan, and his personal ministry was sending cards to friends, family, and long-time acquaintances. He loved living in Carlyle, and was often hiking on trails and enjoying the nature around Carlyle Lake. Most of all, John loved his family.