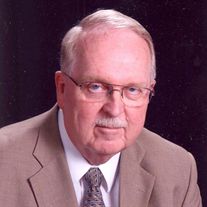 Jon L. Sugg, age 71, of Highland, passed away Wednesday, November 26, in Faith Care Center. Funeral services for 71 year-old Jon L. Sugg will be Monday, December 1 at 10:00 a.m. at Saint Paul Catholic Church in Highland. Friends may call Sunday from 4:00 to 8:00 p.m. at the church. Memorials are suggested to the Highland Area Community Foundation or Hospice of Southern Illinois.
The Spengel-Boulanger Funeral Home in Highland is in charge of arrangements.

Jon was born in Highland Thanksgiving morning, November 25, 1943, youngest child of Marion and Helen (Zbinden) Sugg of Pocahontas. On April 24, 1965, he married Grace Loebel. Married nearly 50 years, Jon still referred to wife Grace as “My Bride”. She survives in Highland.

Jon was raised in Pocahontas where he attended grade school. He graduated from Greenville High School in 1961, attended Greenville College and Southern Illinois University, and graduated from Milwaukee School of Engineering in 1965. In high school he was employed by Swofford Texaco, Stratmann Lumber and Alton Box. While attending college in Milwaukee he was employed by Heiser Ford and Aetna Insurance. After graduation he was employed by Louis Allis Company in Milwaukee, Basler Electric in Highland and McDonnell Douglas in St. Louis. Following a 37 year career as an agent with State Farm Insurance Companies, he retired March 31, 2011. He earned many insurance and travel awards with State Farm. He and Grace lived in Milwaukee after their marriage before returning to Highland. In 1968 they moved to Maryland for a year while Jon was on assignment for McDonnell Douglas at Patuxent River Naval Air Test Center.

He served as Highland Police and Fire Commissioner for 29 years, and was a founding member of the Southwestern Illinois Police Consortium. He held an Illinois Insurance Broker license as well as Series 7 & 63 Securities licenses. He was a former Highland Jaycee member, Highland Chamber of Commerce member, Boy Scout fundraiser, Kirchenfest volunteer and St. Paul Church member. He enjoyed playing tennis on a men’s league in his younger years. He was member of the Okaw Valley Radio Club as a short-wave amateur radio operator with call letters K9WDL, making radio connections with many countries by voice and Morse Code. At age 14 he earned his radio license after assembling a transceiver from a kit ordered by mail with money borrowed from his dad. A long-time season ticket holder, he loved Cardinal baseball. He had a life-long love of aviation, he took flying lessons and had the thrill of solo flights. In addition to his love of airplanes, he loved World War II history, Jimmy Stewart and old western movies, fine automobiles, college basketball, politics, following the Dow, hot weather and a cool drink. He and Grace enjoyed United States and European travel, cruises, trips to St. Lucia, Jamaica, Hawaii, West Indies and their favorite spots, Las Vegas and Puerto Vallarta, Mexico.