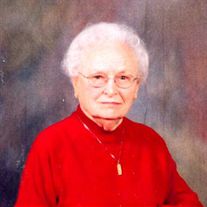 Lucille J. “Lucy” Schwarz, age 88, of Highland, passed away Saturday, November 22, at Faith Countryside Homes in Highland. Funeral services for 88 year-old Lucille J. “Lucy” Schwarz will be Tuesday, November 25, at 11:00 a.m., in the Evangelical United Church of Christ in Highland. Burial will be in Highland City Cemetery at a later date. Friends may call Tuesday, from 9:00 a.m. until service time at the church. Memorials are suggested to Giger Cemetery. The Spengel-Boulanger Funeral Home in Highland is in charge of arrangements.

Mrs. Schwarz was born northwest of Highland, IL in the area known as Deck’s Prairie. She grew up there. A 1944 graduate of Highland High School; Mrs. Schwarz had worked for over thirty years for the Department of Defense as a Federal Supply Clerk, first at the U.S. Army Depot in Granite City, IL and then in St. Louis, MO. She retired in 1983. She enjoyed genealogy, quilting and gardening. She also worked at restoring and maintaining Giger Cemetery.