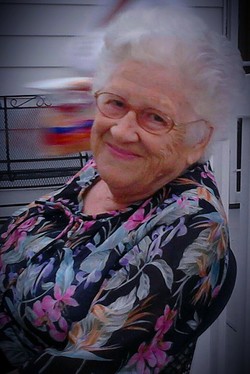 Malinda C. “Corrin” Gammon, age 84, of Carlyle, passed away Sunday, November 16, at St. Joseph’s Hospital in Breese. Funeral services for 84 year-old Malinda C. “Corrin” Gammon will be Thursday, November 20, at 11:00 a.m., at the Zieren Day Funeral Home in Carlyle. Burial will be in Carlyle Township Cemetery. Friends may call Wednesday, from 4:00 – 8:00 p.m. and Thursday, from 8:00 a.m. until service time at the funeral home. Memorials are suggested to the Matthew 25 Food Pantry or the Order of the Eastern Star.

She was preceded in death by her parents – Maurice and Jessie Carrell; her husband Paul L. Gammon; and a son – Edward J. Gammon on October 4, 2012.

Corrin stayed at home to raise her children. Baking was a hobby, and the neighboring school children always enjoyed her baking days. Later in life she achieved her goal of earning her GED. She worked at Wal Mart and later at Dollar General, always smiling and happy to talk to customers. Corrin always enjoyed camping, all her family gatherings and the special time she spent with the “Golden Girls.” They solved all the problems on the patio where she loved watching the wildlife and her flowers. Mrs. Gammon attended the First United Methodist Church in Carlyle, was a member of the Rebekah Lodge in Keyesport, and was Past Worthy Matron of the Order of Eastern Star in Carlyle.