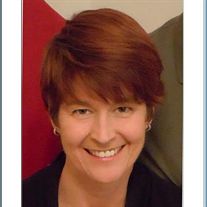 Rhonda Richards Cohen, age 52, of Dallas, Texas, formerly of Greenville, passed away Tuesday, September 23. A memorial service for 52 year old Rhonda Richards Cohen will be held Saturday, November 29 at 11:00 a.m. at the Greenville Free Methodist Church. Friends may call from 10:00 a.m. to service time. Memorials are suggested to Greenville College. The Donnell-Wiegand Funeral Home is in charge of local arrangements.

Rhonda was born in Seattle, Washington on March 17, 1962. She attended and earned her bachelor’s degree from Greenville College. She then attended Standford University where she earned her master’s degree in documentary film production. Jobs took her to Dallas where she worked as a staff and free-lance writer/producer on instructional videos and computer-based training.

Retiring in 2004 from professional life, Rhonda did volunteer work with children, her favorite people in the world. She developed curriculum and taught drama in after-school programs serving all ages. Rhonda and Todd taught 3rd grade religious school on Sundays at Temple Shalom in Dallas for 10 years.