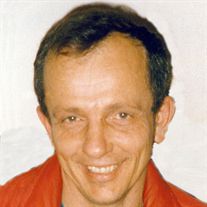 Robert E. Ruegger, age 63, of Palm Bay, Florida, passed away Saturday, October 18, at his home in Florida. Graveside funeral services for 63 year-old Robert E. Ruegger will be held Friday, November 14 at 11:00 a.m. at Highland City Cemetery. The Spengel-Boulanger Funeral Home in Highland is in charge of arrangements.

He was born on Wednesday, May 16, 1951, in Highland, IL, the son of Junior McWhinney and Margaret Catherine (nee Schaefer) Ruegger.

Born and raised in Highland, IL; a 1969 graduate of Highland High School. He served active duty with the US Army for 20 plus years; many years he was a Warrent Officer. He lived in Nepomuk, Czech Republic and the last three years in Florida with his sister and brother in-law.