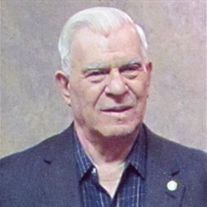 James D. Hediger, age 77, of Highland, passed away Monday, December 22 at his home. Graveside funeral services for 77 year old James D. Hediger will be Wednesday, December 24 at 11:00 a.m. at Fairlawn Cemetery in Vandalia. Memorials are suggested to the American Heart Association. The Spengel-Boulanger Funeral Home in Highland is in charge of arrangements.

He was a member of Operating Engineer Local 520, Granite City, IL (55 years member).

James was born and raised at Clinton County, IL. He served with the US Army. He worked as an operating engineer for many years. He helped build Carlyle Lake. He retired in the mid 1990’s. He and his wife would do annual winters in Florida. He was an avid fisherman and hunter. He enjoyed gardening and outside activities. He was a hard worker, proud of his achievements and loved his wife very much.