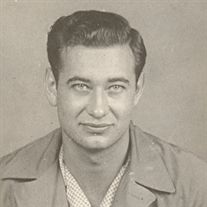 James F. Harlan, age 90, of Highland, passed away Monday, December 22, at St. Joseph’s Hospital in Highland. Graveside funeral services for 90 year-old James F. Harlan will be Tuesday, December 23 at 11:00 a.m. at the Pleasant Hill Cemetery in Steelville, MO. Memorials are suggested to the Highland Animal Shelter or Hospice of Southern Illinois. The Spengel-Boulanger Funeral Home in Highland is in charge of arrangements.

He was born July 05, 1924, in Pinckneyville, IL, the son of Allen and Lillian (nee Duncan) Harlan McGuire.

Mr. Harlan was born in Pinckneyville, IL. After graduation, he joined the Navy. He served as a tail machine gunner in WWII and was awarded a purple heart after being shot down in the Philippines. He was married to Eldonna for 60 years. He worked as a carpenter for over 40 years, retiring as a master carpenter from Granite City School District. Upon his retirement, he and his wife enjoyed life in the country in Steelville, MO. He enjoyed the outdoors and his numerous dogs.