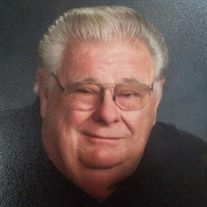 Mr. Armbruster was born in Highland and grew up in Pierron, Illinois. The oldest of five children, he attended Immaculate Conception Grade School and St. Paul High School. He helped raise his brothers and sisters after his father died when he was 11. He attended SIU-C, then enlisted in the U.S. Army, stationed in Italy with the 34th Artillery Division. He attended nine years of night school while working full time at McDonnell-Douglas. He earned an AA and BA degree and most of his Masters. He worked at Missouri Research Laboratories and returned to McDonnell-Douglas. He purchased Warnecke Sheet Metal in 1970, a major heating and cooling contractor in Highland, still active in business today as Armbruster Heating. As a youth, he loved to rebuild wrecked cars. He enjoyed attending auctions, dancing, watching his son and grandson play music and perform with their bands, and watching classic movies. He loved to travel, visiting the Mediterranean, Italy, Spain, London, the Caribbean, and Alaska. Julian was also active in providing leadership and guidance to many young men in the Highland area.