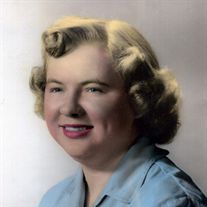 Louise Vohlken, age 78, of Mulberry Grove, passed away Sunday, December 7, at Helia Healthcare. Funeral services for 78 year-old Louise Vohlken will be Friday, December 12 at 11:00 a.m. at the Donnell-Wiegand Funeral Home in Greenville. Burial will be in German Cemetery. Friends may call Thursday from 5:00 to 8:00 p.m. at the funeral home. Memorials are suggested to the Lem Rhodes Cancer Foundation.

Dorothy Louise, the daughter of Max Howard Lude and Dorothy Jane (Spradling) Lude, was born October 2, 1936 north of Greenville, Illinois. She was raised on the family farm and moved to Greenville with her family at age 3. Louise attended Inglis School and graduated from Greenville High School with the class of 1954. She worked for the Model Glove Factory after graduation.

Louise and Harold John Vohlken were united in marriage on December 10, 1955. They moved to Peoria, Illinois where Harold worked and Louise was a home maker. They moved back to the farm in Fayette County south of Mulberry Grove, Illinois on September 1, 1985. She was a member of the Pleasant Mound Baptist Church and the Red Hat Society.

She was preceded in death by her parents, a son in infancy John Max Vohlken and a sister Maxine Blankenship.