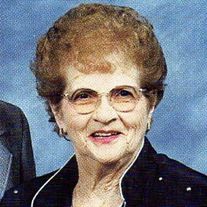 Lucille Langel, age 95, of Greenville passed away at 7:25 p.m. Sunday, December 28, 2014 at Helia Healthcare in Greenville. Funeral services will be held at 11:00 a.m. Friday, January 2, 2015 at the Donnell-Wiegand Funeral Home in Greenville with Darryl Bolen officiating. Interment will follow in Brown Cemetery. The family will receive friends from 4 until 8 p.m. Thursday at Donnell-Wiegand Funeral Home. For those who desire, memorials may be made to the Greenville First Christian Church or to Brown Cemetery.

Lucille Weidner, the daughter of Robert Weidner and Flossie E. Funk Weidner, was born on May 22, 1919 in Hagarstown, Illinois. She attended the one room schools and high school in the area. Lucille attended Beauty School and became a Beauty Operator from 1937 until 1946. After raising her family she worked at Hillview Nursing Home as Physical Therapist for 13 1/2 years. She and Eldon enjoyed farming and were Square Dancers for many years. In retirement Lucille enjoyed many games including Wii Bowling.

Lucille was a very active member of her church, the Greenville First Christian Church.