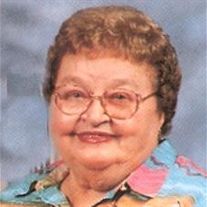 Marian H. Amman, age 93, of Highland, passed away Thursday, December 25 at Faith Care Center in Highland. Funeral services for 93 year old Marian H. Amman will be Monday, December 29 at 10:00 a.m. at St. Paul Catholic Church in Highland. Burial will be in St. Joseph Catholic Cemetery also in Highland. Friends may call Monday from 8:30 to service time at the church. Memorials are suggested to Heartland Hospice or in the form of masses. The Spengel-Boulanger Funeral Home in Highland is in charge of arrangements.

She was born September 22, 1921, in Highland, IL, the daughter of Albert L. and Regina H. (nee Bircher) Wildhaber.

She was a member of Saint Paul Catholic Church. She was also a member of Helvetia Sharpshooters Society.

Marian was born on a farm Northwest of Highland, where Silver Lake is now. Her family moved East of Marine and then on Steinkoening School Road. Her mother died when she was 11. She had worked at the Heel Factory in Marine and St. Louis, then Moulton Bartley Shoe Factory in Highland. After her marriage, she lived 3 miles North of Pierron, working the grain and livestock farm with her husband, she moved to Highland in 1974, following her husband’s death. She enjoyed dancing, playing cards, and her flower gardening.