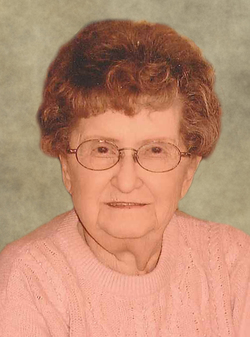 Ruby Bretz, age 89, of Carlyle, passed away Wednesday, December 3 at Aviston Countryside Manor in Aviston. Funeral services for 89 year old Ruby Bretz will be Saturday, December 6 at 11:30 a.m. at the First United Methodist Church in Carlyle. Burial will be in Carlyle Township Cemetery. Friends may call Saturday from 9:00 a.m. to service time at the church. Memorials are suggested to the American Heart Association or the First United Methodist Church in Carlyle. The Zieren Day Funeral Home is in charge of arrangements.

In addition to her parents and husbands, Mrs. Bretz was preceded in death by a sister – Bonnie Carver and her husband, Ralph.

Ruby was the assistant vice president at Farmers and Merchants Bank in Carlyle for over 40 years. After her retirement, she worked as a bailiff at the Clinton County Courthouse. She was the secretary for the Carlyle Cemetery Association for a number of years. Mrs. Bretz enjoyed sewing, spending time with her grandchildren and great grandchildren, and her weekly breakfast gatherings with the “Coffee Club.”