Juanita Holleman, age 89, of San Antonio, TX, formerly of Greenville, passed away Wednesday, December 17 at North Central Baptist Hospital in San Antonio. Memorial services for 89 year old Juanita Holleman will be held Friday, January 9 at 6:00 p.m. at the Donnell-Wiegand Funeral Home in Greenville. Friends may call Friday from 5:00 p.m. to service time. Memorials are suggested to the Autism Society of America or the American Heart Association.

Juanita Brown, the daughter of Delbert L. Brown and Bessie Mae Cameron Brown, was born on April 8, 1925 in Xenia, Illinois. Juanita attended the Xenia public schools and graduated from Xenia High School with the class of 1943. Juanita and Fred Asher Holleman Jr. were united in marriage on March 15, 1946, at the New Haven Methodist Church in Xenia, IL. And they enjoyed just 28 years together before his death on January 26, 1975. They moved to Greenville in 1948 where they raised their 3 children. Juanita moved to San Antonio to be close to her daughter Kelly. 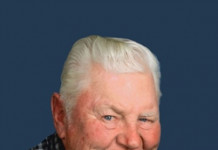