Alice Ann Clark-Loftis, age 56 of Vandalia, formerly of Greenville, passed away Wednesday, March 4 at Fayette County Hospital in Vandalia. Memorial funeral services for 56 year old Alice Ann Clark-Loftis will be held Saturday, March 14 at 3:00 p.m. at the Donnell-Wiegand Funeral Home in Greenville. The family will receive friends from 1:00 p.m. until service time at the funeral home. Memorials are suggested to her daughter and can be made at the funeral home.

Alice Ann Loftis, the daughter of Albert Glenn Loftis, Sr. and Georgia Ann (Hasty) Loftis, was born May 30, 1958 in Granite City, Illinois. She was raised in Granite City and attended the public schools. She was united in marriage to Harry Clark for many years and later divorced. She was a homemaker and raised her children. Alice loved needlework, camping and dancing.

She was preceded in death by her parents and a brother in infancy, William Loftis. 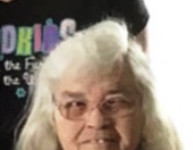