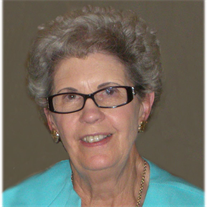 She was born on Monday, December 18, 1933, in Hillsboro, IL, the daughter of Irvin and Frances (nee Roseman) Barnes.

Mrs. Dauderman was born in Hillsboro, Illinois and later moved to Alhambra, Illinois in 1943. She graduated from Highland High School in 1951. She worked for Alhambra Grain and Feed while a sophomore in High School. After graduation she worked at First National Bank in Highland. From 1952-1953 she worked for Cluett and Peabody in St. Louis, Missouri. In 1953, she returned to Alhambra Grain and Feed while her husband, Bob was in the service and until pregnant with her first daughter, Susan. She then helped Bob with the funeral business. About 1980, Carol became a realtor for Schlemer Realty, then Eagle Realty. From 1963-1985, she helped Bob with Galaxy Restaurant. From 1987-1990, she worked for Landmark Bank in Troy. In 1990, she went to work for Madison County Housing Authority and retired in 1997. She received her Funeral Director’s license and helped Bob operate Dauderman Mortuary. Carol enjoyed genealogy, flower beds, gardening, cross word puzzles, her family, and her home.

Memorial contributions may be made to Salem Cemetery Association or Alzheimer’s Association.