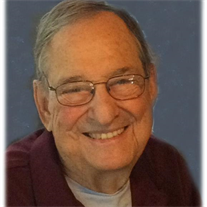 Jerry was born at Pierron, where he grew up and attended Immaculate Conception School, graduating in 1941. He served with U.S. Army from 1/22/1946 to 4/2/1947. He Co-owned Community Lumber Company and Community Builders from 1950 to 1982. He worked for B-Dry and Gutter Helmet until his retirement. He enjoyed fishing, hunting, golfing, boating on Carlyle lake, playing cards, and was an avid bowler. He enjoyed watching the St. Louis Baseball Cardinals and played baseball for Pierron, “All Stars” in his youth.

Funeral Mass will be at 10:00 AM on Thursday, January 14, 2016, at Saint Paul Catholic Church in Highland, IL., with Father Pat G. Jakel officiating.

Memorial contributions may be made to St. Paul School Educational Foundation; Highland Optimist Club; to the Family (to select a memorial later).