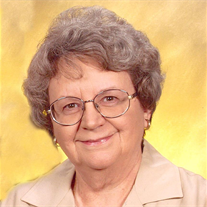 She was a member of Sunrise United Methodist Church. She was also a former member of 1st Congregational Chuch in Highland for 40 years.

June grew up in Joppa and Metropolis and she graduated from Metropolis High School in 1958. She attended SIU Carbondale and graduated with a degree in Elementary Education in 1962. She worked 2 years in Central IL at Clinton and started in Highland Schools in August of 1964, teaching 2nd grade. She taught 32 years in Highland before retirement. In 2005 she and her husband moved to O’Fallon, MO to be near their son. They moved to Trenton, IL in 2010, and returned to Highland in December of 2014. In retirement she enjoyed being a homemaker, and being with her family. She collected antiques, enjoyed shopping and liked arts and crafts.

Funeral service will be at 11:00 AM on Wednesday, January 20, 2016, at Spengel-Boulanger Funeral Home in Highland, IL., with Rev. Jim Blue, Minister of Sunrise United Methodist Church in O’Fallon, MO, officiating.

Memorial contributions may be made to American Cancer Society; Hospice of Southern IL; Education Plus at Highland Community Schools.