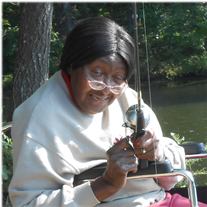 She was born on Wednesday, December 15, 1920, in Corinth, MS, the daughter of Adolphus Burress and Hattie Walker.

She was a member of Kingdom Hall – Jehovah’s Witness, Highland, IL .

Born and raised in Corinth, Mississippi. She lived in California, Texas and Michigan, before moving to Lebanon, IL, in 1971. She was a household manager, taking care of the daily routines and duties of family homes. The last family home she worked at was in O’Fallon, IL. She was an incredible cook. She enjoyed gardening, fishing, cooking, children and her grandchildren.

Funeral service will be at 11:00 AM on Thursday, January 14, 2016, at Kingdom Hall – Jehovah’s Witness in Highland, IL., with Brother Guy Boyd, officiating.

Interment will be at College Hill Cemetery in Lebanon, IL.

Memorial contributions may be made to the Grandchildren.