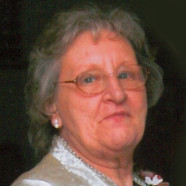 She was born April 20, 1940 in Albers to George and Mary (Huene) Holtmann: they preceded her in death.

She married Ronald Huegen October 27, 1959 at St. Bernard Catholic Church in Albers and he preceded her in death August 18, 2008.

Ruth worked as a dietary aid at Lebanon Health Care Center and was a homemaker. She enjoyed playing bingo, video gaming and puzzles. She was an avid St. Louis Cardinal fan.

Memorials can be made to the donor’s choice and will be received at the funeral home.

Expressions of sympathy can be sent to www.mossfuneralhome.com