Verna Lucille Ohren Obermark, formerly of Greenville, was called home to be with the Lord on Tuesday, January 12, 2016. Mrs. Obermark was born January 27, 1931 in Greenville to Vernon and Ivah (Stoecklin) Ohren. She married John Henry Obermark on July 29, 1950 and was preceded in death by her husband on May 22, 2013. Mrs. Obermark was also preceded in death by her father and mother; a brother, Harold; and a sister, Virginia.

Mrs. Obermark attended Smithgrove School and, along with her husband, John, owned a dairy farm in rural Bond County. She was employed as a nurse’s aide at Utlaut Memorial Hospital. After moving to Marion County Florida in 1965, she was employed by Betty Crocker before retiring as a housewife. Mrs. Obermark was a member of Gracepointe Baptist Church, Summerfield, Florida.

Services will be held Tuesday, January 19, 2016, at 11 AM at the Young Funeral Home Chapel. Mrs. Obermark will be laid to rest beside her husband at Mt. Auburn Cemetery in Greenville. 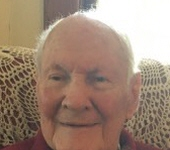