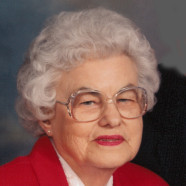 In addition to her parents, she was also preceded in death by her husband Melvin Becker, whom she married April 29, 1947 at St. Dominic Church in Breese and he died on June 20, 2010; sisters, Katherine Ficker, Christine Schniers, Armella Holtgrave, and Leona Wehlage; brothers, John Wehlage Jr. in infancy, Victor Wehlage, and Ed Wehlage; and sisters-in-law and brothers-in-law, Ed Ficker, Herman Schniers, Rich Holtgrave, Irene Wehlage, Forest “Bud” and Gloria Becker, and Lillian Krueger.

Surviving are sons John (friend Cathy Bunn) Becker and Thomas Becker all of Trenton; and a sister-in-law Marge Wehlage of Glenview, IL.

Florence worked as a beautician and along with her husband Mel was a co-owner of Becker Oil in Trenton. She was a member of St. Mary Church and Altar Sodality, Trenton VFW Auxiliary #7983, and because of her love of bowling she was in the Clin-Clair Bowling Hall of Fame.

Funeral Mass of Christian Burial will be Thursday February 4, 2016 at 10:00 a.m. at St. Mary Catholic Church in Trenton with Fr. Joseph Rascher officiating. Interment will follow in the St. Mary Cemetery, Trenton.

Memorials can be made to the Sugar Creek Ambulance Service and will be received at the funeral home.

Trenton VFW Auxiliary will hold services at 6:00 p.m. at the funeral home.