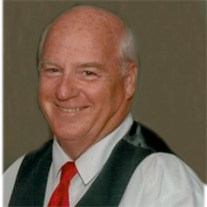 He was born on Tuesday, March 03, 1959, in Highland, IL, the son of Melvin and Shirley (nee McNeill) Nicolaides.

On Saturday, February 25, 1984, he married Rose A. Nicolaides nee Hixson who survives.

He was a former member of the GUTS Church, Tulsa, OK.

Jay was born at Highland and raised in Grantfork, IL; he graduated from Highland High School in 1977. He was an EMT for the City of Highland for several years; he started working for MIREX Corp as a field technician for copy machines. In 1989 he moved to Tulsa, OK, to work for a copying company; in 1995 he moved to Cedar Rapids, Iowa, and was service manager for U.S. Cellular; in 1997 he moved back to Tulsa, OK, and worked as a National Repair Manager for U.S. Cellular; in 2000 he worked for G.E.F. as a field technician on wide format printers; his current job he started in 2011 for EFI as a field engineer. In 2013 he returned to Highland. He loved NASCAR, his favorite driver was Dale Earnhardt, Jr.. He enjoyed woodworking and had just purchased an oversize router. He did everything to make his grandsons happy, Four- wheeling and tractor rides were always fun for the grandsons. Jay was always helping friends and neighbors. He was a “Very Outgoing Man’.

Memorial Service will be at 8:00 PM on Monday, February 29, 2016, at Spengel-Boulanger Funeral Home in Highland, IL.

Memorial contributions may be made to Victory Junction.