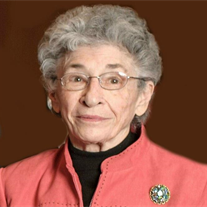 She was born March 07, 1929, in Highland, IL, the daughter of Edgar and Blanche (nee Jacobs) Hoffman.

She was a member of Saint Paul Catholic Church. She was also a former member of the Daughter’s of Isabella Sacred Heart Chapter #237 in Highland, IL.

Joan was born in Highland, IL and graduated St. Paul High School in 1947. She attended Brown’s Business College. She was very active with her grandchildren and great grandchildren’s sport and academic activities. She had a life long hobby with her husband of antiquing. She also had been active with the Perpetual Adoration at St. Joseph Hospital since its start.