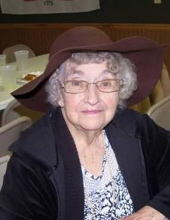 Lavon was born November 30, 1925 in Patoka, IL to George and Hazle Pearl (Walker) Peddicord. She married Elbert Eyman on November 30, 1945. He died June 26, 1990. She is survived by her children Karen Royer and her husband Rex of Patoka, IL, Dean Eyman and his wife Tammy of Vandalia, IL, Lavonna Daniels and her husband James of Keyesport, IL, Diane Rosenberger of Ramsey, IL, Danny Eyman of Keyesport, IL, Rickey Eyman and his wife Dita of Vernon, IL, Jerry Eyman of St. Elmo, IL, Judy Wilkerson and her husband Mark of Hagarstown, IL, Mike Eyman and his wife Stella of Ramsey, IL, Jane Linville of Vandalia, IL, and Sherri Forbes of Vandalia, IL. She is also survived by her sisters June Thalman and her husband Cecil of Patoka, IL, Jean Obermark of Ramsey, IL, her brother Don Peddicord and his wife Sharon of Irving, IL, along with 21 grandchildren, 29 great grandchildren and 5 great great grandchildren. She was preceded in death by her husband, a daughter Gloria Jean Eyman, a son Elbert Wesley Eyman, a sister Anna Mae Cripe, and a half brother Cecil Peddicord.

She grew up in the Patoka and Pittsburg areas. She graduated from Carlyle High School. She and her husband lived southwest of Dudleyville and then moved to rural Keysport south of Columbus Baptist Church.