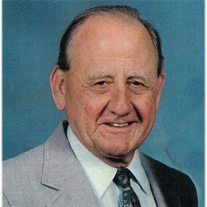 He married Henrietta J. Schroeder nee Wilken who passed away on Friday, October 25, 2002.

Arnold was born at Bartelso, IL; he grew up there and worked on the family farm. He served with the US Army, during WWII, from June 8, 1942 to January 13, 1946, as a Machine Gunner in the Philippines and Asiatic Pacific Theater, he received two Bronze Stars. After the service he return to the Metro East and worked as a painter at Scott Air Force Base, IL; he later retired in the 1980’s. He and his wife moved to Denver, Colorado in the late 1990’s. After his wife died he returned to Highland. He was a choir member at St. George Catholic Church, New Baden, IL. He enjoyed yard work and was a gardener.

Interment will be at Resurrection Cemetery in New Baden, IL.

Memorial contributions may be made to St. Paul School Education Foundation.