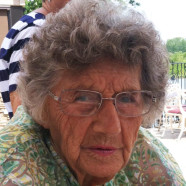 In addition to her parents, she was also preceded in death by her husband William B. Williams, whom she married February 9, 1946 in Hernando, MS and he died May 1, 2000; a daughter, Paula Davis; a son, Michael Williams; and a great-grandson, Caleb Williams.

Audie was a homemaker and loved gardening, planting flowers, fishing, sewing, and spending time with her family.

Funeral Services will be Saturday, March 12, 2016 at 10:00 a.m. at the Moss Funeral Home in Trenton with Pastor Jerry Dooley officiating. Interment will follow in Lake View Memorial Gardens in Fairview Heights.

Memorials may be made to the donor’s choice and will be received at the funeral home.