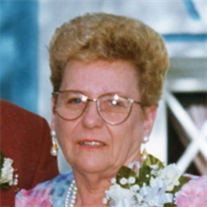 Bessie Irene Kelley, the daughter of Sidney Monroe Kelley and Maude Elizabeth Beanblossom Kelley, was born September 1, 1927 in Vandalia, Illinois. She was raised on the farm Northeast of Mulberry Grove North of Old Park and attended one room schools graduating from Mulberry Grove High School.

Bessie is preceded in death by her parents, her husband Frank, their son Merle T. Rench on April 19, 2015 and their great-grand son Kenton Jon Scoggins age 6. Bessie is the last of her generation of 11 Kelley children, being preceded in death by Helen Sexton, Fern Roesselet, Loyd Kelley, Harold Kelley, Merle Kelley, and 5 brothers and sister in infancy.

Bessie and Frank lived on the farm south of Mulberry Grove early in life then near Pleasant Mound, Mulberry Grove, Greenville, Vandalia where Frank worked for Farm Service. They moved to Jerseyville in 1954 with Jersey Grain Company, in 1963 to Hinsdale, Downers Grove, Morton with Illinois Grain Corporation, then in 1967 back to Mulberry Grove where they opened Midwest Commodities in 1968 which they co-owned and operated with Bessie as book keeper until 2002.