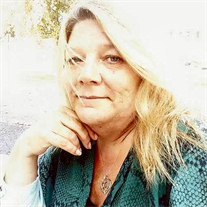 She was born on Thursday, January 19, 1967, in Troy, IL, the daughter of Jerry and Frances (nee Galbraith) Tracy.

Ms. Robison was born in Troy, Illinois. In 1972, she moved to Alhambra, Illinois. She graduated from Highland High School in 1985. She lived in Naples, Florida, and returned to Alhambra in 1992. She moved to St. Louis in 2004 and then to New Baden, Illinois, just over a year ago. She worked for AG Edwards in St. Louis until 1999. She enjoyed horseback riding and spending time with her daughters and family.

Funeral service will be at 10:00 AM on Friday, March 11, 2016, at Dauderman Mortuary in Alhambra, IL., with Rev. Mark L. Stryjak, Pastor, St. John United Church of Christ, Trenton, IL, officiating.