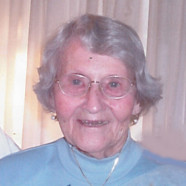 In addition to her parents, she was also preceded in death by her husband, Vincent Koppers whom she married April 18, 1929 at St. Mary’s Catholic Church in Trenton; a daughter, Janet Crabb; and sons-in-law, Louis Koch and William Crabb.

Mrs. Koppers was a homemaker and a former seamstress, and a member of St. Mary’s Church and Altar Sodality in Trenton.