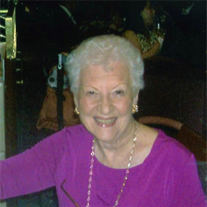 Funeral services will be held at 1:00 p.m. Thursday, April 21, 2016 at the Greenville First United Methodist Church with Pastor Flo Scott officiating, The family will receive friends there at the Church from 10 a.m. until service time. For those who desire memorials in Elle’s memory may be made to the Greenville First United MJethodist Church at the service or at the Donnell-Wiegand Funeral Home in Greenville.

Eleanor Florence Willis, the daughter of Charles Edward Willis and Dorothy Mae Dryden Willis, was born on August 18, 1924 in St. Louis, MO. Elle grew up in St. Louis and attended the Samuel Cupples Grade School and graduated from Bluett High School in 1941. Elle was a telephone operator then worked for McDonald-Douglas Air Craft retiring from Boeing Air Craft in 1978.

Elle and Larry F. Mounger were united in marriage on June 7, 1975 in the Greenville Methodist Church and enjoyed only 25 years together before his death on December 22, 2000.

Elle is survived by her son John A. (Katherine Ross) Moon of Greenville who has lovingly cared for his mother in his home, and a host of grandchildren, great grandchildren and 1 great great granddaughter.

Elle is preceded in death by her parents Charles and Dorothy Willis, her husband Larry, her daughter Donna L. Harris, and is the last of her generation.

Elle has been a faithful member of the Greenville First United Methodist Church.