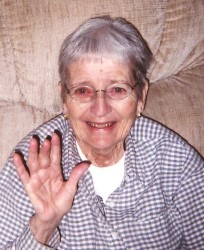 Anna Elaine Mullen Dagen, the daughter of William Arthur and Mabel Gertrude Smith Dagen, was born November 15, 1929 near Donnellson, Illinois. Elaine was raised on the family farm in Donnellson, attended the Donnellson School and graduated from Greenville High School in 1947.

Elaine and J. Robert Dagen were united in marriage on November 19, 1947 at the Presbyterian Church. They enjoyed 55 years together. Robert passed away on January 6, 2003. They were the parents of three children: Kathy Lynn Dagen who died after birth in 1956, Nancy Cocks who passed away December 20, 2014 and Barbara Ann Gegan and her husband William who survive from Centralia, Illinois.

Elaine helped her husband run Dagen Radio and Television for many years. They opened Dagen’s and later the Bond County Country Store which they ran together for 25 years. Elaine continued to run the store and retired in 2005.

Elaine was one of 6 children; they have all preceded her in death: David E. Blankenship, Theodore Blankenship, Pauline Ellis, Esther Kerrin and William Arthur Mullen, Jr.

We are asked to remember Elaine fondly, as there will be a private funeral and burial in Mt. Auburn Cemetery. She loved animals; any donations are asked to be made to the Bond County Humane Society. Condolences may be made online www.donnellwiegand.com