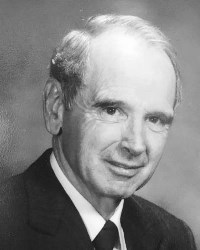 Chris grew up in Southern IL on a family farm. He joined the Navy during WWII and upon his return he earned a BS in agriculture, with a major in Pomology from the University of Illinois, followed by a Master’s degree in Horticulture and Pomology from Kansas State University. He spotted his future wife while she was employed at his family’s fruit farm and courted and married her while earning his degrees. He and Irene raised their children in Council Bluffs, Iowa and then Edwardsville, IL in a loving Christian home. He continued on to a storied career, recognized both in Iowa, where he was a pioneer in dwarf apple trees, and in Illinois, where he became a renowned expert in horseradish. He published numerous professional articles and was well respected in all his fields of knowledge.

He was a dignified, intelligent man with a mischievous sense of humor. Chris was devoted to his family, loved to play cards, fish and worked many happy hours in his home orchard.

After his retirement, Chris continued to be sought after as a consultant throughout the Midwest and worked for another 25 years offering his expertise to friends, colleagues and clients until he and Irene moved to Wheaton, IL to be closer to family. He remained devoted to his wife and cared for her as her health declined.

Chris was a lifelong member of the Knights of Columbus and many professional horticultural societies. He received multiple awards for his contributions to his various areas of study, including the 2014 “Illinois Specialty Growers Association’ Award of Excellence.

Chris died of congestive heart failure surrounded by family. Due to the ongoing pandemic, a memorial service will be celebrated at a later date. The family requests any contributions be made either to Chris Doll’s scholarship program, care of: https://www.specialtygrowers.org/scholarships or to the Alzheimer’s Association: https://www.alz.org.