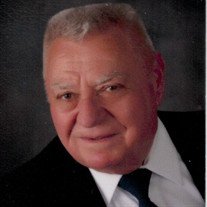 It is with deep sorrow that the family of Donald Billy Rinderer of Highland, IL announces his peaceful passing with his wife and family by his side. Mr Rinderer left his temporary earthly home too forever be with his Lord on October 10, 2020 at the age of 88 years old. He was born on September 13, 1932 in Highland, IL to his loving parents Wilbert H. and Laura M. Rinderer.

Don grew up on the family farm south of Highland, attended Lee Country School and Highland High School class of 1950. He assisted his father on the farm until his induction into the United States Army Air Corporation during the Korean War. He served from 1954 until 1956 and the Reserves from 1956 until 1962. He served in the air division of the Army as a small plane and helicopter mechanic. He received The National Defense Service metal and The Good Conduct metal.

After separating from the US Army in 1956 as a Specialist 4 Technician, Don returned home and continued to farm with his father. He set up his own grain farm entity until his retirement in 1998. Don also had milk cows and raised cattle in his earlier years. He was part owner of The Rinderer Brothers Excavating with his brother Dean for over 45 years. Don also developed Forest Haven Estates Subdivision.

He served 8 years on the Board of Directors of the Trenton AG CoOp and belonged to the Madison County Farm Bureau.

Don was honored along with 22 other veterans by The Greater St. Louis Honor Flight Org. (who provide veterans with honor and closure) to accompany a flight to Washington DC to visit our National War Monuments built in honor of their service. The Veterans departed on May 6, 2017 at 6 am and returned at 8:30 pm to a phenomenal massive surprise reception. This was further made possible by his cousin Boyd Rinderer who served as his Guardian during the occasion. Boyd being a 22 year Naval veteran himself.

Don was a Life Time Member of the American Legion Post 439 of Highland, IL. He served as Commander from 2012 – 2014 and was a member of the Military Funeral Honor Guard for several years assisting in providing full Military Honors for deceased members of the military.

On June 10, 2019 The Central Illinois Quilt of Valor Foundation presented Don with The Quilt of Valor for his service in the US Army to protect and defend the United States of America.

Don was an active and supportive member of the Evangelical United Church of Christ of Highland. He was confirmed on April 10, 1946. He served on the Consistory Board, Property Board, Membership Board (convener), Men’s Fellowship Group, Communion and Usher Committee. He loved to participate in the church Chicken Dinners.

He served on the Faith Countryside Board of Directors from 2006 thru 2012 as a member, Vice-President and President during those years. Don was a Platinum contributor.

He was a Life Time member of The Moose Lodge 2479; a Lifetime Member of the Woodmen of the World Highland Camp #105; he also belonged to The Helvetia Sharpshooters Society.

Don was a member of the Ainad Temple, A.A.O.M.S. (Shriners)-E.St. Louis and a Life Time member of the Ancient Free & Accepted Masons Marine Lodge #355.

He loved to dance, hunt, fish, snowmobile riding and gardening. He particularly enjoyed traveling with his seed corn family to many International destinations. Don traveled several places Stateside as well. The highlight of his expeditions was hunting Bear in Canada, Elk in New Mexico, Mule Deer in Montana and just deer hunting wherever he could. He thoroughly enjoyed being around and having fun with his many friends.

COVID-19 restrictions will be followed, masks required and social distancing.

Memorial Donations may be made to Evangelical United Church of Christ, American Legion Post 439, or Shriners for Children.