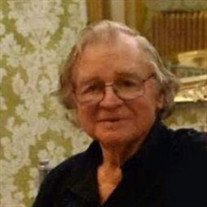 Eddie was born in Reno, IL and at a young age his family moved to Highland. He graduated from Highland High School in 1954. Attended SIU Carbondale for a year and served two years with the US Army. He worked 20 years at Widmer Floral Co, Highland, and later worked for the Highland City Water Plant, retiring in 1998. He enjoyed annual family trips to hunt and fish in Wisconsin. He loved his grandchildren.

Private funeral services will be at Spengel-Boulanger Funeral Home in Highland, IL.