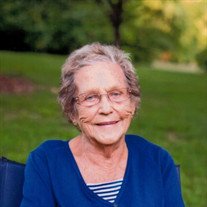 Evelyn was born in Bond County, near the village of Old Ripley, on the family farm where she grew up. Following her marriage, she and her husband farmed 7 years northwest of Old Ripley. In 1963, they built their home 1 1/2 miles east of Grantfork. Evelyn had worked for 6 years at Basler Electric in Highland, however she devoted her life to her children, her husband and her grandchildren. She enjoyed sewing, quilting, mushroom hunting and loved yard work and maintaining the large family yard. In 2003 she moved to Highland, living on Falcon Drive.

Private family visitation will be held at Spengel-Boulanger Funeral Home in Highland, IL.

Interment will be at St. Eubaldus Catholic Cemetery in New Douglas, IL.

The family will receive friends during a luncheon at St. Gertrude Social Hall on Tuesday at 12 noon.

Memorial contributions may be made to St. Eubaldus Cemetery or Grantfork Fire Dept.