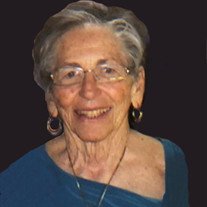 She was born on Sunday, March 17, 1935, in Herrin, IL, the daughter of David and Antoinett (nee Restelli) Chiodini.

Mrs. Lutostanski was born in Herrin and attended Our Lady of Mt. Carmel School. In 1953, she graduated from Herrin High School and attended St. John Mercy School of Nursing in St. Louis. She became an RN in 1956 and worked at Herrin Hospital for two years. She lived in Champagne/Urbana and then moved to north county of St. Louis. In 1972, she and her husband moved to Highland. Since the early 1990s, they enjoyed spending the winter months together in Bonita Springs, Florida. She also enjoyed reading, playing tennis for years, kniting and crocheting, crafts, and spending time with her children; grandchildren and great grandchildren.

All public services have been cancelled because of the new COVID-19 requirements.

Interment will be at St. Joseph Cemetery in Highland, IL.