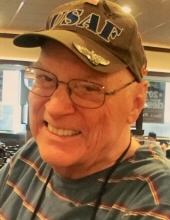 Michael Francis Hockett of Apple Valley, California ,formerly of Alton, Illinois, passed away on July 15, 2020 after his 21/2 year battle with kidney cancer.

Graveside Services will be held at 2 p.m. Thursday, October 22, 2020 at CampGround Cemetery south of Greenville with Pastor Dee Armes officiating. Full Military honors will be conducted by Bond County V.F.W. Post 1377, assisted by the Patriot Guard. For those who desire memorials may be made to the CampGround Cemetery at the Donnell-Wiegand Funeral Home.

Michael F. Hockett, the son of Grant and Edith Hunter Hockett, was born on November 27, 1945 in Alton, Illinois. Michael’s brothers Don and Clyde were much older than he, so growing up Mike was a lot like being and only child.

After high scohool, Michael answered his country’s call by joining the Air Force on September 23, 1965 in St. Louis. Michael rose to the rank of Sgt. on October 1, 1968 and was Honorably discharged on January 22, 1969 at Chanute Airforce Base after serving 11 months and 26 days overseas. At the age of 20, Michael married the Love of his life—Judy. They have enjoyed 54 wonderful years of marriage.

After leaving the Air Force, Michael went back to college and completed his degree and teaching credentials. He spent the next 6 years teaching high school business math and overseening the school’ internship program. It was during his 20″s that Mike started studying the Bible with the Navigators and chose to follow Jesus Christ as his Savior and Lord.

Mike was an avid reader. He loved reading the Bible and other great Christian books. So after six years of teaching, Michael entered the career that he love the most. Serving in the Christian book industry. Mike worked for Zodervan Publishing House for 20 years. Afterward he worked for Lemstone Franchises and the Christian Book Association in Colorado Springs.

In 2009, Michael and Judy retired in Apple Valley where Mike started a new part time career selling solar panels. He continued reading just about every good book that he could get his hands on. He continued to speak to family and friends about his faith in Jesus Christ. Mike and Cush had a mutual love for genealogy, so they had a standing date to study their family genealogies every Thursday.

In 2018, Michael was diagnosed with kidney cancer. He fought it bravely for 2 1/2 years, and on July 15, 2020, his fight came to an end. We believe that Michel was able to echo the words of the Apostle Paul in Second Timothy 4; 7-8. “I have fought the good fight, I have finished the race, I have kept the faith. Now there is in store for me the crown of righteousness, which the Lord, the righteous Judge, will award to me on that day–and not only to me, but to all who have longed for his appearing.”

Thelma and Michael will always be loved and will never be forgotten.