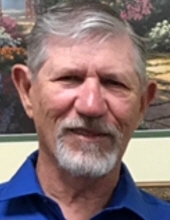 Graveside funeral services will be held 11:00 a.m. Friday, October 9, 2020 in Mt. Auburn Cemetery with military honors. Pastor Tyson Graber will officiate. Visitation will be held Thursday, October 8, 2020 from 4:00 – 8:00 p.m. at the Donnell – Wiegand Funeral Home. Masks are required and social distancing as CDC will be followed. Memorials may be made to the American Heart Association or the Lemuel Rhodes Foundation.

Gary Mike, the son of Thomas Roy and Mary Crawford Bearley, was born August 11, 1946 in
Lawrenceville, Illinois. He grew up in Lawrenceville and around the age of 10 the family moved to Granite City, Illinois. Mike attended the local schools in Granite and graduated from Granite City High School.

Mike served our country in the United States Navy, enlisting on February 8, 1965. He served during the Vietnam War, receiving the National Defense Service Medal, Vietnam Service Medal with one Bronze Star and the Vietnam Campaign Medal with device. Mike was honorably discharged on January 7, 1969 and served till February 7, 1971 in the reserves.

Mike and Sandra Kay Furtak were united in marriage on April 15, 1967 in California. They had to postpone the wedding several times because of the war, and they were married in California where Mike was stationed. They have enjoyed 53 years together. They are the parents of Mike Bearley of Highland, Illinois and his fiancé Dianna Merz and David Bearley of Greenville and his wife Rhonda.

He is survived by his sons, 6 grandchildren: Felica Marie Menke and Tyler, Michelle Renee Bearley and her fiancé Jamie Vogler, Brooklynn Leonhard and Christian, Carson Bearley and Adyson Bearley, and Heather DeVaisher and Darin. Loving great-grandfather to Jude, Oliver, Caiden, and Dryston. Mike is also survived by all his siblings: Bill Bearley, Judy Moerlien, Tom Bearley and Tim Bearley.