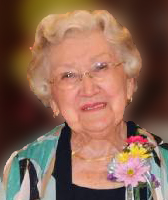 Mrs. Golding was born in Tillman County, Oklahoma, on May 4, 1924, a daughter of Wesley Andrew and Ruby Lee (nee Crouch) Gregg. She married Glenn L. Golding in the chapel of the Army Air Corps Base in Frederick, Oklahoma on August 2, 1943. He preceded her in death on March 9, 1993.

Mrs. Golding is survived by a son – Richard W. “Ric” and Jan Golding of Carlyle; two grandchildren – Andi (Golding) and Theo Merian, and Skipp and Tina (Arrowsmith) Golding; four great grandchildren – Luke and Mara Merian, and Payton and Addison Golding; and two sisters – LaDwana (Gregg) Urton of Yukon, Oklahoma and Sherma (Gregg) and Carl Brown of Richardson, Texas. She was preceded in death by her parents, her husband, and a brother-in-law – Jesse Urton.

Mrs. Golding worked for the Ritenour Consolidated School District in Overland, Missouri, and retired as the public relations director for the district. She was a member of the Carlyle Christian Church.

Private services will be held for Mrs. Golding. Expressions of sympathy in her memory are suggested to the Carlyle Christian Church Outreach Center. Memorials and condolence cards will be accepted through Zieren Funeral Home, PO Box 276, Carlyle, IL 62231. Online condolences may be shared with the family by visiting www.ZierenFuneralHome.com.