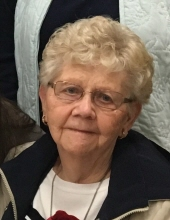 Dorothy Marie Knight, age 90 of Greenville, passed away peacefully Tuesday, November 3, 2020 at her daughter’s home in Greenville surrounded by her loving family.

Funeral Mass of Christian Burial will be held 9:30 am Monday, November 9, 2020 at St. Lawrence Catholic Church with Father Allan Hunter officiating. Interment will follow in Mt. Auburn Cemetery, where she will be laid to rest next to her loving husband Guy, her parents Al and Marie Sullivan and two brothers, Robert and Harold. Visitation will be held Sunday, November 8, 2020 from 4:00 p.m. – 7:00 p.m. at St. Lawrence Catholic Church. Masks are required for the visitation and funeral. Memorials are asked to be made to the Pregnancy Support Center or Bond County Hospice.

Dorothy Marie, the daughter of Alma Homer and Marie Cora (Bucholz) Sullivan, was born August 25, 1930 in St. Louis Missouri. Dorothy was raised near Greenville on the family farm. She attended Inglis School and Little Hickory School. The family moved to Bingham, Illinois to farm and Dorothy graduated from Ramsey High School with the Class of 1948. Dorothy attended Eastern Illinois University, took a job in St. Louis where she met her dear husband Guy.

Dorothy was united in marriage with Guy Lawrence Knight on July 8, 1950 at St. Mark’s Catholic Church in St. Louis, Missouri. They enjoyed 67 years together. Guy passed away on March 15, 2018. Guy and Dorothy lived near Filmore, Illinois and later moved to Cahokia, Illinois. Guy and Dorothy moved to Greenville in 1970 to be closer to Dorothy’s parents. Dorothy worked at the Elementary School and Ju. High for over 18 years until she retired in 1993.

She was the last of her generation, preceded in death by her parents and her 2 brothers: Robert Edward Sullivan in infancy and Harold Lee Sullivan at the age of 16.

Anyone who knew our mother Dorothy knew her as a loving, caring, woman who had a deep loving relationship with her Lord and the Blessed Mother. She prayed daily and taught others how to pray. She possessed such great faith, faith that never faltered and loved all unconditionally. Her deep passion were the Rosary and the babies, born and unborn. Dorothy worked hard to protect the unborn because she believed every baby was a gift from God. A single red rose or a handmade Rosary, in which she sent to many, was her signature. “A single red rose says it all” was her way of saying you are loved and in God’s hands. She was a humble servant for the Lord.