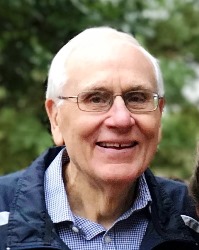 Edward Koch passed into his next life on Wednesday, November 25, due to complications resulting from a fall while walking in a park near his home in Kirkwood, Missouri. Born on October 19, 1936 in Breese, Illinois, he was the treasured only child of Frances Dressler Koch and Herman Koch. He attended McKendree College for two years before transferring to Illinois State Normal University where he played varsity basketball. This honed his life-long enjoyment of exercise, with particular skills in basketball, tennis, and bicycling. Following two years of high school teaching, his love of travel led him to become a teacher in the US Department of Defense Dependents Schools for two years at Frankfurt American High School in Germany and a year at Upper Heyford AFB in England. This allowed him to visit Russia, Egypt, and many European countries before returning to the US for a Master’s in political science and history at Illinois State University.

While in graduate school, he met his wife, Karen Kuhfuss Koch, who joined him in his England teaching year. They returned to Trenton, Illinois where he ran a wholesale distribution company, Koch Candy Company, which had been founded by his father in 1936, and supplied businesses in an 80-mile radius with candy, tobacco, and sundries until 2002. He and Karen were heavily involved in community activities, along with their three children. He served as President of the Community Bank of Trenton, Treasurer of the Trenton Council of Churches, President of the Illinois Candy and Tobacco Distributors, President of the Trenton Chamber of Commerce, board member of Trenton St. John United Church of Christ, volunteer at Trenton Food Pantry, and volunteer with Boy Scouts. He never missed an event of his children and grandchildren. A stint on the board of the National Candy Wholesalers Association brought new friendships and travel destinations, and following his retirement, he took great pleasure in travel with Karen, and sometimes inviting all their children and grandchildren for memorable adventures in Croatia, Greece, Costa Rica, Argentina, and Europe.

Ed was known for his unfailing thoughtfulness, kindness, and ready smile and humor. His favorite interests were reading, exercise, performance arts (especially opera0, food, and in recent years, cooking and grandchildren’s activities. He and Karen relocated to Kirkwood, MO in 2018 to be near their daughter’s family, and he was an enthusiastic student and facilitator in the Washington University Life Long Learning program, having presented two courses there in Russian history.

Ed is survived by his wife, and three children and their families: Devin (Cammy) of Mill Valley, CA, Caroline Young (Kendall) of Des Peres, MO, Kristen (Jessie) of Santa Barbara, CA. His beloved grandchildren are Marissa, Ellery, and Griffin Young, and Ayla Koch-Bergren.

Due to the Covid-19 quarantine, a memorial service will be held at a later date. Ed was an organ donor. The family suggests that memorial donations in his memory might be made to the Trenton, IL Food Pantry, or Kirk Care Inc. of Kirkwood, MO to provide food and donations in this time of need, or to St. John United Church of Christ in Trenton and will be received through Moss Funeral Home, 535 N. 5th, Breese, IL 62230 who is serving the family.