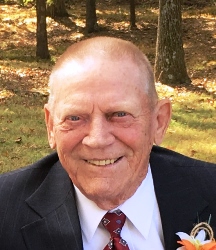 Henry L. Detmer, 79, of St. Rose passed away Wednesday, November 18, 2020 peacefully at his home, surrounded by family, after a two-year battle with melanoma.

Henry served in the U.S. Army in the 1960’s and received an Honorable Hardship Discharge, before returning home to take over his family’s farm upon his father’s passing. Subsequently he worked for St. Rose Township (22 years), Hilmes Excavating (8 years), and the Clinton County Highway Department (13 years), retiring in July 2006 after ultimately spending a total of 35 years plowing snow. Henry was the ultimate tinkerer, spending many hours in his shed; there was nothing he could not repair. He enjoyed deer hunting, fishing, teaching his beloved chocolate lab, Etta, many tricks, and passing on his shenanigans to Livy and Jack. Henry will be remembered for his wonderful sense of humor and his fantastic storytelling, which you never quite knew how factual the stories were. He enjoyed socializing at Bill’s Place and Liz’s (then Pat’s, then Tina’s) Tavern drinking Busch beers and shooting the bull with friends and family. In addition to his numerous grandkids and great grandkids, Henry was like a bonus grandpa to all his wife’s babysitting kids. Henry was a member of St. Rose Catholic Church and a former member of the St. Rose Development Club, Volunteer Fire Department, and Men’s Sodality.

Due to COVID, a private family funeral mass will be held at St. Rose Catholic Church.

In lieu of flowers and plants, memorials may be made to Clinton County Relay for Life, Clinton County Humane Society, or to the donor’s choice and may be mailed to Moss Funeral Home, who is serving the family.