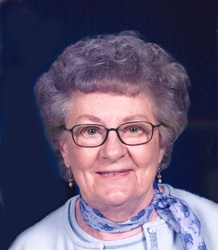 She was born March 21, 1930 in Bartelso, the daughter of the late Bernard and Frances, nee Kohrmann, Wellinghoff.

In addition to her parents, she was preceded in death by her husband Edward “Flip” Foppe, whom she married March 28, 1951 at St. Cecilia Catholic Church in Bartelso and who died March 16, 2016; brother, Pete Wellinghoff; sister-in-law, Marty Wellinghoff; brothers-in-law, Bud Davis and Jack Wieter; and also many Foppe sisters-in-law and brothers-in-law.

A private family Funeral Mass of Christian Burial will be held at St. Augustine Catholic Church in Breese followed by the interment in St. Dominic/St. Augustine Cemetery in Breese.

In lieu of flowers, plants, and other gifts, memorials may be made to St. Augustine Catholic Church and will be received through Moss Funeral Home, 535 N. 5 th , Breese, IL 62230 who is serving the family.